Collette Dinnigan is one of the country’s most successful and celebrated fashion and interior designers. In 2017 Collette was awarded an Order of Australia, and was also the Special Guest Editor for Vogue Living’s ‘Italian’ issue.

Collette became the first Australian to mount a full-scale ready-to-wear collection in Paris in October 1995, and in 1996 was invited by the Chambre Syndicale de la Haute Couture to show on the prestigious Paris Fashion Week schedule. In 2008, she was invited to join the esteemed executive board of the organization.

Collette was no overnight success. Hard work and passionate attention to detail have driven her to become Australia’s most lauded designer. Her list of awards is long. She won Australian Designer of the Year in 1996, and, most notably, the Louis Vuitton’s Business Award in 1997. She received the Award for Excellence from Fashion Group International in 1998. The same year she was appointed Chairperson of The New South Wales Small Business Development Corporation, having previously participated as an advisor to the South Australian Wool Board.

In July 2000, a selection of the Collette Dinnigan 2001 Autumn / Winter collection and her Resort 2001 range were exhibited in the London’s Victoria & Albert Museum, for Fashion In Motion. The following year, she teamed up with iconic UK retailer Marks & Spencer to launch well-priced lingerie called Wild Hearts. 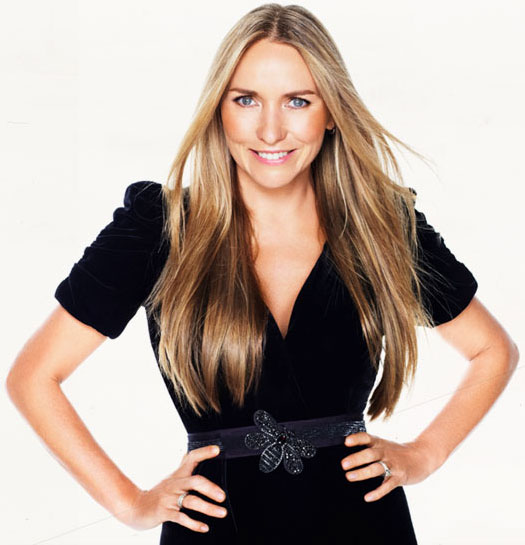 In 2001 and 2003 she was voted one of Australia’s 50 Most Beautiful Exports. In Paris, in 2002, she was honoured with the Leading Women Entrepreneurs of the World Award, and in 2004 she was presented with the CLEO and Maybelline Celebrity Designer of the Year award. Then in 2005, her image was put on a stamp by Australia Post as part of their Australian legends campaign and received further awards from Marie Claire and Instyle the same year. In March 2008, Collette landed the National Retailers Association’s prestigious Award for Fashion Excellence. The award donors individuals whose outstanding achievements and ongoing commitment have made a significant contribution to the Australian Fashion Industry.

Her celebrity status was confirmed when in August 2006 Collette became a face of the American Express “My Life. My Card” campaign, alongside Robert De Niro, Anthony La Paglia, Kate Winslet, and Venus Williams. The following year she was honoured with Olivia Newton John at the G’DAY USA event in New York. It was said by the Australian Consular General, the Hon. John Olsen: “We are thrilled to have two great Australian icons. Their undeniable talents and achievements are an inspiration to us all.”

Collette is a designer who supports her creativity with a sharp sense of reality which is why in 2008 she worked with Target to deliver Wild Hearts to Australian consumers though the retailer’s stores. Her Bridal Collection has been stocked internationally to retailers including Barneys New York and Browns in London. Collette has designed the wedding dresses for brides, including Tony Collette, Miranda Kerr and Sarah Murdoch. During 2010, Collette Dinnigan launched her new Collette By Collette Dinnigan lingerie range into Marks and Spencer in London.

While her aesthetic essence is undeniably Australian, Collette’s sensibilities translate easily around the world. Every garment was carefully hand-made and then shipped to stores in a variety of destinations around the globe, including Asia, Europe, Middle East, United Kingdom and the United States.

At the beginning of 2015, Miele Australia appointed Collette Dinnigan as brand ambassador. Her collaboration began with Miele’s Laundry Care collection which highlighted the advancements of laundry technology, enabling the same level of care as dry cleaning on delicate garments, but from the comfort of consumers’ homes.

On September 2nd, 2015, the Honorable Julie Bishop opened Collette’s retrospective exhibition, Collette Dinnigan: Unlaced, at the Museum of Applied Arts and Sciences, Powerhouse Museum. Collette Dinnigan is the first designer exhibition to be shown at the Museum’s Centre for Fashion. The exhibition explores Collette’s creative process and the romantic, feminine designs that have seen her work sought after by a star-studded clientele of international actresses and royalty. Her work has appeared in movies and television and is worn by fashion icons worldwide including Princess Mary of Denmark, the Duchess of Cambridge, Nicole Kidman, Angelina Jolie, Beyoncé and many more notable influencers.

In October 2015, Collette disrupted the retail industry releasing a limited edition, affordable childrenswear range Young Hearts for German retailer Aldi. Following its popularity, Collette developed her second and final Aldi Summer Young Hearts range in 2016, introducing clothing for young boys. The collaboration was described by Retail Doctor Group’s Brian Walker as “one of the most brilliant tactical promotional activities seen in the past few years”.

Collette has many successful and ongoing collaborations with luxury brands and companies such as Qantas, Audi, Specsavers and Dom Perignon. In recent times, Collette has turned her eye for design, lending her aesthetic to a number of interior collaborations and special projects including new Sydney residential development, Golf House Surry Hills with architect Peter Israel, designing luxury penthouse suites at Bannisters by the Sea Mollymook, an exclusive wallpaper range for Porter’s Paints, a range of designer optical and sunglasses for Specsavers and a new linen collection with homewares specialist, Linen House.

Collette Dinnigan is a true creative spirit who embraces life and art with daring and passion. From an unconditional childhood to the glittering catwalks of Paris, Collette’s journey is a fascinating one, full of surprises. Born in South Africa, she moved to New Zealand with her family in the 1970s, then to Australia where she worked for the ABC in the costume department before her design career began. Her first line was lingerie, which saw great success, and was then followed up by a ready-to-wear collection in 1995.

Famously known for her fashion, Collette Dinnigan was the first Australian to launch a ready-to-wear collection in Paris.

In more recent times, Collette has been busy writing children’s books. Santa Loves Australia takes readers to different places across Australia and introduces indigenous storylines. A great gift to give children and a wonderful read. Another of Collette’s books is Louis and Sippy Save the Sea. The The premise of the story is educational as the characters battle the odds against the horrible weight of pollution and explore the sea world which is so magical and yet so fragile.

Another recent launch is the Collette Dinnigan Ceramica homewares collection, inspired by her time in Southern Italy’s regions of Puglia and Basilicata. The pieces are all handmade and hand-painted and can be purchased from KFive in Melbourne and The South Store in Bowral.

2021 saw Collette put herself out of her comfort zone and join Channel 10’s Celebrity Master Chef, an experience she loved. Collette was a finalist in a thrilling must-watch episode 13.

We use cookies on our website to give you the most relevant experience by remembering your preferences and repeat visits. By clicking “Accept All”, you consent to the use of ALL the cookies. However, you may visit "Cookie Settings" to provide a controlled consent.
Cookie SettingsAccept All
Manage consent

This website uses cookies to improve your experience while you navigate through the website. Out of these, the cookies that are categorized as necessary are stored on your browser as they are essential for the working of basic functionalities of the website. We also use third-party cookies that help us analyze and understand how you use this website. These cookies will be stored in your browser only with your consent. You also have the option to opt-out of these cookies. But opting out of some of these cookies may affect your browsing experience.
Necessary Always Enabled
Necessary cookies are absolutely essential for the website to function properly. These cookies ensure basic functionalities and security features of the website, anonymously.
Functional
Functional cookies help to perform certain functionalities like sharing the content of the website on social media platforms, collect feedbacks, and other third-party features.
Performance
Performance cookies are used to understand and analyze the key performance indexes of the website which helps in delivering a better user experience for the visitors.
Analytics
Analytical cookies are used to understand how visitors interact with the website. These cookies help provide information on metrics the number of visitors, bounce rate, traffic source, etc.
Advertisement
Advertisement cookies are used to provide visitors with relevant ads and marketing campaigns. These cookies track visitors across websites and collect information to provide customized ads.
Others
Other uncategorized cookies are those that are being analyzed and have not been classified into a category as yet.
SAVE & ACCEPT